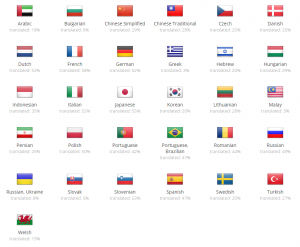 Contribute to an open source project, help translate Revive Adserver to your own language

Being a community project, we want to ask for contributions from the community. We’re looking forÂ people who can read English well, and are able to translate the texts in Revive Adserver into their own native language.

We’re inviting users who would like to participate and contribute, to join the Revive Adserver translation project at Crowdin. Several languages that we’ve identified are already listed there, and other language can be added if a translator comes forward.

Once you’re logged in, go the languages overview of the translation project and click on the flag of the language you want to translate. From there, it’s simple and the Crowdin tool will even help you with suggested translations.Â Everyone contributing to the translations will get a special mention on the Translations page of the project website as soon as the next release of the software is available.

This is the ideal opportunity to contribute to an open source project, even if you’re not a programmer. It would be great to have at least 2 translators per language, so community members can help each other and proofread the translations offered by their colleagues.

We look forward to seeing the community come together to help translate Revive Adserver, so that non-English speaking users can get the most benefit from our software.