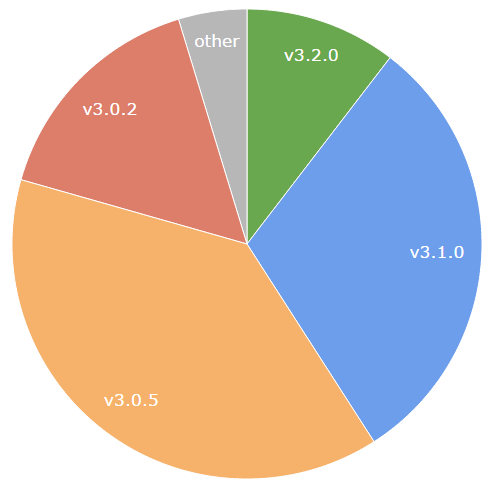 Revive Adserver version distribution on May 25, 2015

One monthÂ after the release of v3.2.0 of the Revive Adserver software, we’re starting to see a nice adoption rate forÂ the new version by the community. This graph shows the various versions and their relative share of the overall picture.

There were a total of 6,449 active installations of Revive Adserver being counted on May 25.

We are very proud to notice that so many of you have started to use version 3.2.0. If you’re still using version 3.1.0, that’s fine too. It might be that you’re waiting for a known issue in v3.2.0 with Flash banners not working correctly via the new asynchronous tags to be fixed. We’re close to releasing a bug fix release that will take care of that.

Running version 3.0.5 or even version 3.0.2, which is what more than half of the community is doing, is something we are a little bit concerned about. Any versions before v3.1.0 (or the special patch release v3.0.6) has several known security vulnerabilities. We would like to urge anyone still using one of those older versions to upgrade to the most recent version available. Just download the newest version and then follow the upgrade instructions.