After our blog on January 16, reporting that there were 1,222 active installations of Revive Adserver, we have a new number to report.

We’re very proud that we now have more than 2,500 active instances of Revive Adserver. 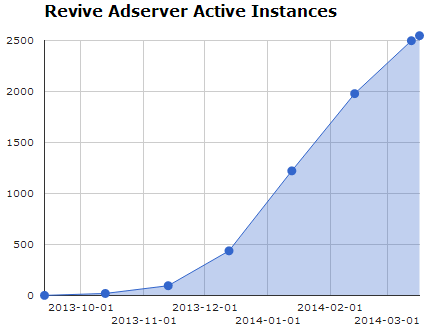 Active Instances of the Revive Adserver software on March 17, 2014

In the chart on the right, each dot represents the number of active instances at one month intervals after the first release on September 13, 2013. There are two dots in the top right corner. The lower one is the number of active installs on March 13, so exactly 6 months since we started this project. On this date, which also marked the release of the new Revive Adserver v3.0.3, the counter was at 2,498, just 2 short of a major milestone.

Today, we can celebrate crossing that mark. In fact, on March 17, 2014, the counter was at 2,547, and the number continues to grow every day. This is more than double the number we had 3 months ago!

We want to thank each and every member of the Revive Adserver community for their trust in the project and for using our software on a daily basis!