Keep your Revive Adserver installation up to date 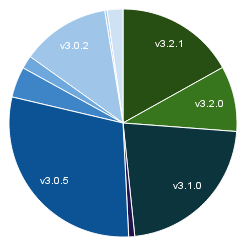 Following up on an article about the quick adoption of Revive Adserver v3.2.0, I had a look at the currentÂ situation. From the numbers for July 31, 2015, it turns out that almost halfÂ of all Revive Adserver installations runs a recent version of the software, v3.0.6 or above.

Seeing over 2,000 instance running v3.2.x, and over 1,300 of those on the most recent v3.2.1 is very rewarding. These users take full advantage of the newest functionality, which includes the asynchronous javavcript tags introduced in v3.2.0Â (and a small fix for Flash ads via async tags in v3.2.1).

A little over 1,700 of you are still running on version 3.1.0. That version is perfectly stable, and if you don’t have a need for asynchronous tags, it is understandable that upgrading is postponed. Since the previous blog post, some 15% of v3.1.0 user have upgraded to v3.2.0 or v3.2.1. These newer versions do have many enhancements and bug fixes, so I would suggest that upgrading is something to be considered.

Recommendation to upgrade for users of all older versions

Version 3.0.6 is a small security fix relative to v3.0.5, so it might even be that part of those v3.0.5 installation have that patch applied, even though the application will still report in as v3.0.5.

Anyone still running Revive Adserver software older than v3.0.5 is exposed toÂ several known security vulnerabilities, all of which have been fixed a long time ago. IÂ would like to urge anyone still using one of those older versions to upgrade to the most recent version available. Just download the newest version and then follow the upgrade instructions. Like with any other software product, running the latest stable version is the safest option.

Update October 14, 2015: An article explaining the importance of keeping the ad server software (or might we add: any software) up to date, can be found here:Â The malicious side of online ads – how unpatched servers hurt us all